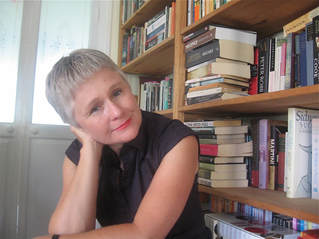 Ashley Hay has published three novels and four books of narrative non-fiction. Since mid-2018, she has been the editor of Griffith Review.

Her second novel, The Railwayman’s Wife, was published in Australia (2013), the UK (2014), and the US (2016) to critical and popular acclaim. Gail Jones (author of Five Bells) praised it as "a tender portrait of a marriage and the poetry and grief it contains; a beautiful, dreamy, melancholy book,” while Debra Adelaide (author of Letter to George Clooney ) wrote that it “illuminates the deepest places of the human heart”.

It won the 2013 Colin Roderick Prize and the People’s Choice Award at the 2014 NSW Premier’s Prize, and was also longlisted for the Miles Franklin and Nita B. Kibble awards.

Her first novel, The Body in the Clouds, was published in 2010 and described by The Weekend Australian as "a gorgeous, Fabergé egg of a book, enamelled with literary resonances and rhyming symbols, which we will still be reading decades from now". It was published in the US in July 2017 – you can see it’s beautiful new cover over here and read the stunning review it received in the New York Times here.

Between 2000 and 2007, she published four books of narrative non-fiction – The Secret and Gum, and Herbarium and Museum (the latter two in collaboration with renowned visual artist  Robyn Stacey) – all of which reveal an ongoing fascination with stories about fabulous people and their obsessions.

Her essays, short stories and journalism have appeared in anthologies and journals including the Griffith Review, Brothers and Sisters, The Monthly, The Bulletin, Best Australian Essays, Best Australian Short Stories, Australian Geographic, and Brothers and Sisters. She has also received and been shortlisted for various prizes for her science writing, journalism, essays and short fiction – including the Bragg UNSW Press Prize for Science Writing, the Eureka Award for Excellence in Science Journalism, the Publishers' Association Awards, the Creative Nonfiction Essay Award and the Sydney Morning Herald's Young Writer of the Year.

Her work has been praised as “beautifully written and evocative” (Eureka Street), as “well researched and deliciously written” (Australian Book Review), and as having “a delightfully light style, sometimes reminiscent of a Wildean 1066 and All That” (Sydney Morning Herald).

“If Jane Austen were alive and working as an investigative reporter,” said The Australian, “she would write a book like The Secret.”

In 2014, she edited that year's Best Australian Science Writing for NewSouth Books. In 2015, she was awarded the Dahl Trust/Australian Book Review fellowship and received the 2016 Bragg UNSW Press Prize for the resulting essay, "The Forest at the Edge of Time".

She completed a Doctorate of Creative Arts through the University of Technology, Sydney and she lives in Brisbane.
Proudly powered by Weebly