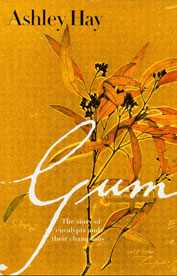 Gum: The Story of Eucalypts and Their Champions
Duffy & Snellgrove, 2002

No matter where you look in Australia you're more than likely to see a eucalyptus tree. Scrawny or majestic, smooth as pearl or rough as a pub brawl, they have defined a continent for thousands of years, and still shape our imagination.

Indigenous Australians have long woven myths about the abilities of the eucalyptus. Since Australia was colonised, botanists have battled for more than two hundred years in a race to count, classify and own the species. This is the story of that battle and of other eucalyptographers – explorers, poets, painters, foresters, conservationists, scientists (and engine drivers) – who have been obsessed by them, championing their powers. Gum trees have promised to cure malaria, solve the drainage problems that had defeated the Roman emperors, forest the Sahara and divine gold.

Gum is about a magical, mythical, medicinal tree. More than that, it's the story of new worlds, strange people and big ideas.

‘Because of the ubiquity of the gum tree and its significance for the landscape, [Hay] can bring Australia’s explorers, surveyors, botanists, artists, authors and environmentalists into one continuous dialogue with nature. Indeed the book’s great strength comes from the unfolding sense of Australian national identity that somehow crystallizes around the eucalyptus tree.” – Tim Flannery, The New York Review of Books

‘Hay’s Gum is like a gum itself: it is made in equal parts of light and leaf; of music and matter … [It is] a sturdy, shapely book of fact, animated by wonder. Hay is a journalist, and she knows how to do her research. But she is also a writer, and she knows how to shape a story out of disorderly data. Her tale, this forest, has many branches, smoothly and sinuously interwoven.’ – Mark Tredinnick, The Canberra Times

‘Hay brings these peculiarly Australian trees to life, describing a slice of our colonial history in the process.’ – The Sydney Morning Herald

‘As this beautifully written and evocative book makes clear, we are tied to the gum tree in ways we can’t even imagine.’ – Eureka Street