Please scroll down for reviews of older books 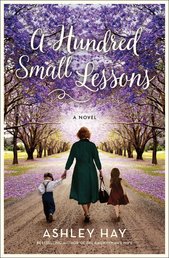 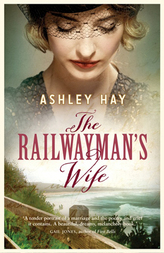 
‘Ashley Hay’s beautiful romance of grief and love set in the escarpment landscape that once enchanted D.H. Lawrence will come to speak for the south coast in the same way that Delia Falconer’s The Service of Clouds speaks for the Blue Mountains. Everything about this novel – sudden loss, unexpected love, misdirected hope and desire, as well as the mysterious power of the written word and the candescence of the coastal landscape itself – is expressed with a profound understanding of every nuance of emotion. An extended meditation on “the limitless surprise of being here”, to quote from the poem that is central to the story, The Railwayman’s Wife illuminates the deepest places of the human heart.’ – Debra Adelaide, author of Letter to George Clooney

‘Indeed, in this poignant rumination on life, death, memory, dreaming, and the anxious spaces in between, it’s hard to find fault with a single one of Hay’s words, which speak to and provoke our deepest desires for literature to transform and heal us … Hay makes us acutely aware of our place as readers, appealing to our need to believe in and empathise with others, both real and imagined, while reminding us of our terrible powerlessness to alter history, no matter how much we may long for alternate endings. As Ani, Frank and Roy try to make peace with the edges of their stories, Hay throws the healing power of words to the wind. Ultimately, we are left to find within its beginnings and endings our own sense of meaning, acceptance and hope, and to lose ourselves within its tender melancholic beauty.’ – Meredith Lewin, The Sunday Age

‘ … a heart-crunching novel about reading and writing, dreaming and hoping, loving and taking flight. It’s been a while since I felt so deeply affected by a novel and I will be very surprised if this book is not an award winner.’ – Paula Grunseit, Australian Bookseller and Publisher

‘This gentle and contemplative book is more like an extended poem than a novel. It’s an elegiac story to be read quietly for its exploration of loss and hearts seeking consolation.’ – Good Reading

‘Hay is a gifted and insightful writer; her prose is elegant and she has an eye for the telling detail. Most important, she understands people and the secret battles her characters face.’ – Adelaide Advertiser

‘Hay’s prose possesses a simple grace: stories and ideas matter to her, but so too do style and mood … In The Railwayman’s Wife, the essence of loss is elusive, and the detritus of grief not easily swept aside.’ – Australian Book Review

‘ … a melancholy love story, unfolding at its own steady pace, engrossing us in the lives and losses of its principals . . . Hay manages the emotional weather of the novel with equability, compassion and intelligence . . . another recent fictional return to the just-out-of-reach Australia of the 1930s and ’40s. Hay’s venture there is wishful, astringent and rewarding.’ – Peter Pierce, The Canberra Times

‘ … a beautifully rendered and psychologically acute picture of Ani Lachlan’s widowhood … Outwardly, there is no exorbitance to Ani’s grieving. Only the reader is privy to the chaos of her emotions, the perverse and magical thinking she privately indulges … Hay handles the delicate progress of Ani’s return to the world with sympathy and toughness; she is an author in whom intellectual scope and empathetic imagination are not separate activities but two sides of the same coin. If her first novel, The Body in the Clouds, was a book in which ideas were predominant, this work is unashamedly concerned with the movements of the heart. Finally, though, Thirroul itself emerges as a central presence in the novel … we know D.H. Lawrence got in first … Yet it is fair to say Hay, who spent her childhood in the same town, brings her own poetry to bear. She makes of it a coastal sublime, meticulously described. But she also makes that liminal strip into a metaphor – at once vaporously melancholy yet profoundly ordinary – in a manner that recalls the sour-sweet best of Michael Ondaatje’s fiction. Another author, Ford Madox Ford, began his The Good Soldier by claiming, “This is the saddest story.” It isn’t. That title rightly belongs to The Railwayman’s Wife.’ – Geordie Williamson, The Australian

‘One of the strange contradictions of fiction is that immense beauty can often be found in writing about grief and loss. The things we often choose to look away from or avoid in everyday life can, in the hands of a novelist like Ashley Hay, become rich terrain. The key to the novel is the notion that it is only through narrative that we can understand ourselves at a personal level and that, through this process, can we come to terms with the world. This is the uplifting message that surges through The Railwayman’s Wife and out of the experience of loss. It shows us that not all stories about grief are desolate, that somehow, in finding a way to travel through these difficult emotions, people are capable of great things. This sense of hope is conveyed in one of the novel’s concluding sentences, aptly reminiscent of Hemingway: “Somewhere in the world, the sun is always rising.”’ – Gretchen Schirm, Sydney Review of Books

'An extraordinary light falls on every page of this tender and gripping story. The lives of a widow and a war poet, mending and dreaming in a tiny coastal village, reveal movingly a wider world of catastrophe, violence and beauty.'  – Belinda Castles, author of Hannah and Emil
TOP

The Body in the Clouds

'With The Body in the Clouds, [Hay] makes a triumphant entry into fiction. Opening in 1930 with the plunge of a workman named Roy Kelly from the half-finished Sydney Harbour Bridge into the water below (he’s the only person to have survived the fall), the novel braids together stories of three men who witness the dive (or something like it) at different moments in time, all from the same vantage at Dawes Point. This startling conceit is sustained throughout a novel which ranges in time from the 1700s to the early Aughts, and from our first astronomer William Dawes to an expatriate financial worker returning to Sydney after years abroad. It is a gorgeous, Faberge egg of a book, enamelled with literary resonances and rhyming symbols, which we will still be reading decades from now.’ – The Weekend Australian

'[A] scintillating and accomplished debut novel … Ashley Hay’s structures and her characters are illuminated by an incandescent intelligence and a rare sensibility. A commanding debut novel indeed.' – The Australian Book Review

'Daring and original, brilliantly executed … The novel The Body in the Clouds forcibly, if curiously, recalls is Michael Cunningham’s Specimen Days. Both the American’s fiction and Hay’s are at once intensely disquieting yet brought to harmonious resolution. No matter what they describe, the writing in each case is imbued with an eloquent calm.' – The Canberra Times

'Richly imaginative, but also dauntingly complex[,] Hay tells three separate stories, and slowly converges them … What the great American poet Hart Crane did for Brooklyn Bridge, Ashley Hay has done for this one.' – The Australian

'[Her] turn to fiction writing, away from nonfiction, provides an opportunity for her to give readers what her characters long for: not just relics but whole moments and lived passages from the past, filled out and felt. Her novel acts as a bulwark against the contemporary loss of willingness to see and seek out the extraordinary in the ordinary world.' – The Sydney Morning Herald

'She illuminates the connections and the manner in which we choose and create stories to meet our own needs. It's a pleasure to read: superbly written and imaginatively conceived.' – Adelaide Advertiser

'It will whet its readers' appetites, leaving them eager to know more about the culture of natural history that shaped the Macleays and their collections.'  – Times Literary Supplement

‘In an exquisite introductory essay, Ashley Hay tells how Alexander [Macleay]'s son William and nephew William John succumbed to the same mania, piling up butterflies and beetles, bats, gnats and bandicoots, corals and sea lilies, cuscuses and birds of paradise (William John led and paid for the colony's first scientific expedition to New Guinea), and a skull long thought to belong to a (mythical) bunyip; it was actually a deformed foal's.’  – Time magazine
TOP

In 2006, Ashley was asked to contribute an essay to When Books Die, the first of a series of anthologies planned by a new publishing house, Finlay Lloyd. She wrote an essay called 'The Importance of the Snuffleupagus: Reading, Writing and Imaginary Friends,' which is still one of her favourite pieces, and which was singled out in The Australian's review of the volume. You can read that review  here.
TOP

‘Stacey's luminous photographs of plants collected over a period of 230 years are complemented by Hay's lively text about those who lived, and in some cases died, in pursuit of them.’ – The Telegraph (London)

'Based around the National Herbarium of New South Wales, this is a fascinating and pictorially stunning history of its creation and present day status. … With an informative, easy-to-read and endlessly fascinating essay on the subject by Ashley Hay, as well as the stunning photographic portraits, this is a book for all spectrums of reader - gardener, historian, adventure-lovers, botanist and museum-lovers.' – The Book Place
TOP

‘Because of the ubiquity of the gum tree and its significance for the landscape, [Hay] can bring Australia’s explorers, surveyors, botanists, artists, authors and environmentalists into one continuous dialogue with nature. Indeed the book’s great strength comes from the unfolding sense of Australian national identity that somehow crystallizes around the eucalyptus tree.” – Tim Flannery, The New York Review of Books

‘Hay’s Gum is like a gum itself: it is made in equal parts of light and leaf; of music and matter … [It is] a sturdy, shapely book of fact, animated by wonder. Hay is a journalist, and she knows how to do her research. But she is also a writer, and she knows how to shape a story out of disorderly data. Her tale, this forest, has many branches, smoothly and sinuously interwoven.’ – Mark Tredinnick, The Canberra Times

‘Hay brings these peculiarly Australian trees to life, describing a slice of our colonial history in the process.’ – The Sydney Morning Herald

‘As this beautifully written and evocative book makes clear, we are tied to the gum tree in ways we can’t even imagine.’ – Eureka Street

‘Part Gothic thriller, part comedy of manners, postmodernly mindful of biographic limitations, Hay's is an engrossing story of the past told in the language of the present’  – The Australian