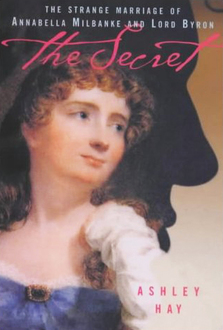 Everyone wanted to be Lord Byron's wife: he was London's most famous poet and its most desirably notorious lover. On January 2, 1815, he married Miss Annabella Milbanke, a young lady with handsome prospects, good connections, and admirable ankles. Fifty-four weeks later, a scant month after the birth of their first child, she left him and his house and went home to her parents. She never saw her husband again. She never spoke to her husband again. After months of shot-firing, and with London flooded with every possible nasty rumour about why his wife had left him, they both signed a Deed of Separation, and Byron left England. How long would Lady Byron hold a grudge? For the rest of her life — and beyond. And at the base of it all was her secret, that hidden and unspeakable thing festering under her decision to leave.

She never stopped thinking about it, never stopped talking about it, and never revealed the horror and enormity of whatever it was. It defined her, more than anything else she ever did. And it defined Byron — not as the country’s leading poet — but as someone about whom it was possible to say anything and everything. And have it believed. If you tell a story once — completely, up-front, and with nothing murky or obscured — it is set and known, definitive. If you tell a story with a secret at its core, it can change and turn and morph with every new reader, every new age.

This is the story of the Byrons’ strange and scandalous marriage, all fifty-four weeks of it, and everything that it is possible to turn it into. This is Lady Byron’s guide to revenge and retribution, and the story of why Lord Byron and Miss Annabella Milbanke should never have married each other in the first place.

‘Part Gothic thriller, part comedy of manners, postmodernly mindful of biographic limitations, Hay's is an engrossing story of the past told in the language of the present’  – The Australian

‘Beautifully written … a gripping read as compulsive as any novel’ – Daily Mail, London