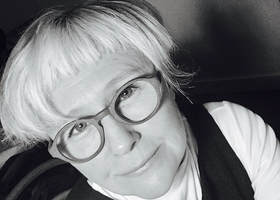 Ashley Hay’s most recent novel, A Hundred Small Lessons, was published in Australia in April 2017, in the US in November 2017 (as celebrated by USA Today) and in the UK in early 2018. It will be released in Italy in 2020.

Its first review came with five stars from Books+Publishing. You can read an extract from that review over here, and you can read more reviews here and here. Her conversation with ABC-RN's Kate Evans at the 2017 Sydney Writers' Festival is also available here.

Ashley's first novel, The Body in the Clouds, published in Australia in 2010, was published in the US in July 2017: you can see two beautiful trailers for it here and here, and you can read James McNamara's lovely review of it for the New York Times here.

Her second novel, The Railwayman’s Wife, was published in Australia, the UK and the US, and in translation. It was awarded the Colin Roderick Prize ("for the best book published in 2013 reflecting Australian life") by the Foundation for Australian Literary Studies and also won the People’s Choice Award at the 2014 NSW Premier’s Prize. It was longlisted for that year's Miles Franklin and Nita B. Kibble awards, and shortlisted for the Christina Stead Prize for Fiction in the NSW Premier’s Prize. A lovely new edition has just been published by TwoRoads in the UK.

Her essay, "The Bus Stop" (which won a prize in Creative Nonfiction's edition on The Weather) was selected for inclusion in Best Australian Essays 2016. And her essay, "The Forest at the Edge of Time", won the 2016 Bragg/UNSW Press Prize for Science Writing and was selected for inclusion in that year’s Best Australian Science Writing anthology, edited by Jo Chandler.

She lives in Brisbane, Australia and is the editor of Griffith Review.
​