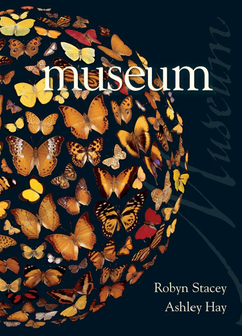 Museum: The Macleays, Their Collections, and the Search for Order
Cambridge University Press, Australia, US and UK, 2007

Museum is a sumptuous showcase of Australia’s natural history. It tells of some of the remarkable people who collected and studied it, and of their legacy, the Macleay Museum.

When the first British people arrived on Australia’s shores at the end of the eighteenth century, it was not only the potential of new territory that tantalised them, but also the extraordinary living things that they found here. European collectors clamoured for a kangaroo, a parakeet, a waratah, and ship after ship sailed north loaded with Australian specimens.

The most serious collector to make his own trip to the Antipodes arrived in 1826. His name was Alexander Macleay, and over the next seven decades he and his family accumulated from Australia and beyond an astonishingly diverse collection of specimens.

Museum throws open the doors of a rich and rare collection, captured in the exquisite images of Robyn Stacey. It reclaims the stories of those specimens and those obsessions, revealing a unique and passionate chapter in Australia’s history.

'It will whet its readers' appetites, leaving them eager to know more about the culture of natural history that shaped the Macleays and their collections.'  – Times Literary Supplement

‘In an exquisite introductory essay, Ashley Hay tells how Alexander [Macleay]'s son William and nephew William John succumbed to the same mania, piling up butterflies and beetles, bats, gnats and bandicoots, corals and sea lilies, cuscuses and birds of paradise (William John led and paid for the colony's first scientific expedition to New Guinea), and a skull long thought to belong to a (mythical) bunyip; it was actually a deformed foal's.’  – Time Magazine